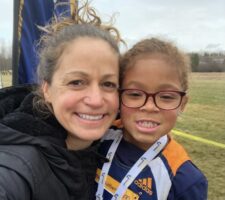 Joanna first joined the St Albert Track and Field Club (now Mustangs) as a Peewee athlete in 1987. As a bantam she discovered her love for hurdles and was the Athletics Alberta Athlete of the year. Her commitment to the sport led to a long string of successes:

Throughout her time with the St Albert track club as an athlete, she also took on coaching responsibilities with the Junior athletes and provided track camps for children within the community. Added to this, she also coached the Zone 5 Team for Alberta Summer Games and outreach clinics for Athletics Alberta.

Joanna, now a mother of a young daughter, has changed her focus from sprints to long distance running and competes in road races from 5km to the 1/2 marathon.